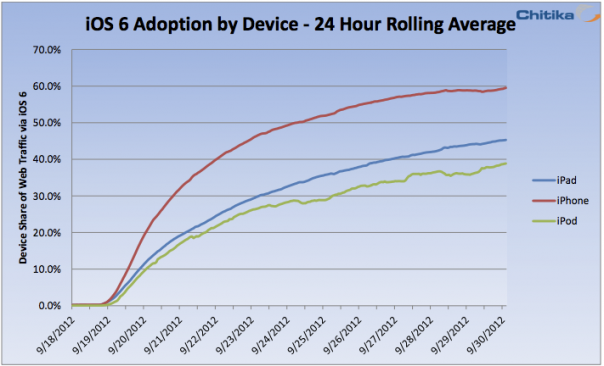 It seems Apple’s latest release of its mobile operating system iOS 6 is being adopted very quickly by users of iPhones, iPads and iPod touches. The iOS app developers couldn’t be happier, considering they will soon have the chance to support less versions of the mobile OS, and focus on the latest software instead.

The new OS from Apple has been available since September 19, and in its first 24 hours of availability, it was installed on 15% of iDevices. In the next two weeks, according to Chitika’s report, it was adopted by 60% of the iPhone users, followed by 45% of iPad users. iPod Touch owners have been a little bit slower to update their devices, with only 40% making the jump by the end of September. More hardware versions of the iPhone are compatible with iOS 6 when compared with the various iPad and iPod touch models, which may explain the higher upgrade rate for iPhone users.

Despite the fact that many users have complained of worse battery performance after updating to iOS 6 and the unmitigated failure – Apple Maps, iOS 6 was adopted twice as fast as the previous versions of the software.

On the other hand, Android’s fragmentation issue (different devices being limited to different versions of the OS and most users being dependent on their carrier to decide when/if they get updates) caused a limited adoption of the Ice Cream Sandwich (4.0) and later versions of the OS to just 25% of Android devices.