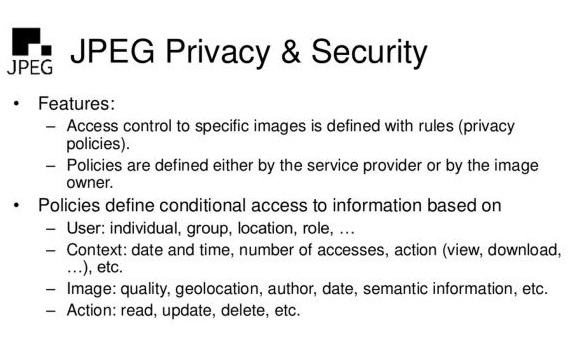 JPEG Privacy & Security – a new activity launched by the JPEG committee – aims at developing a standard for realizing secure image information sharing, capable of ensuring privacy, maintaining data integrity, and protecting intellectual property rights. This activity is not only intended to protect private information carried by images – i.e. in the image itself or the associated metadata – but also to provide degrees of trust while sharing image content and metadata based on individually set policies. JPEG Privacy & Security will explore ways to design and implement the necessary functionality extension to current JPEG standards without significantly impacting on coding performance while ensuring simultaneously features such as scalability, interoperability, and forward and backward compatibility.

The nowadays trend is to share images immediately via the Internet using social media and image repositories (i.e. Facebook, Flickr, YouTube, and Pinterest). Newspapers are publishing digital pictures from their photographers or image material provided by their readers. This proliferation of use of digital images gave also rise to a number of conflicts in terms of non-intended release of privacy information, e.g. metadata associated to a published picture that still contained geographical information that allowed to identify persons that have given anonymous interviews to journalists, or pictures posted on social media only intended for a limited audience that went public.

The proposal could protect your privacy by encrypting metadata (such as where you took a photo), but it could also prevent you from copying or opening some pictures. This raises concerns about whether DRM would actually be used to protect an individual’s privacy or much more likely to limit public use of images.

But how effective can an image-based DRM be in the longterm, given the ease of simply using a screenshot to make a copy?