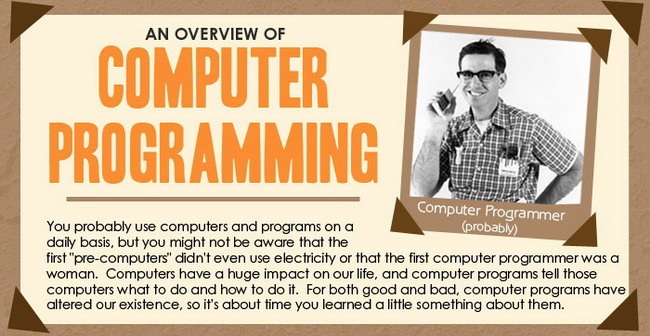 The first programmer was a woman? Ada Lovelace described the first algorithm that is cited as the first computer program.

The first electronic digital computer was developed in 1937. It was called the Atanasoff-Berry-Computer (ABC) and it used binary arithmetic, regenerative memory, paralel processing and separate memory.

The first programmable electronic digital computers were the Colossus machines. The Colossus computers were developed for British codebreakers during World War II to help in the cryptanalysis of the Lorenz cipher used by the Germans.

The first high level computer programming language used was Fortran. Fortran was invented by John Backus from IBM in 1954 and released commercialy in 1957.

The first Computer Game was called Spacewar! and it was launched in 1961 by Steve Russel. The Spacewar! game took 200 man hours of programming and it was written on a DEC interactive mini computer

The first computer virus programmer was Fred Cohen. In 1983 he wrote a program that could infect a computer, copy itself and infect other computers by the use of a floppy-disk.

The “Spiritism” behind Conscious Web Development
...it is not only about coding, but it is also about being aware of the bigger picture and the needs of the project. Being aware of each step the project...
316 Likes

Wanted: QA Engineer
Job Description This is chance for a QA Engineer with a passion for quality, continuous integration and performance, to work on a long term - high profile project. You will...
349 Likes
Quick question?