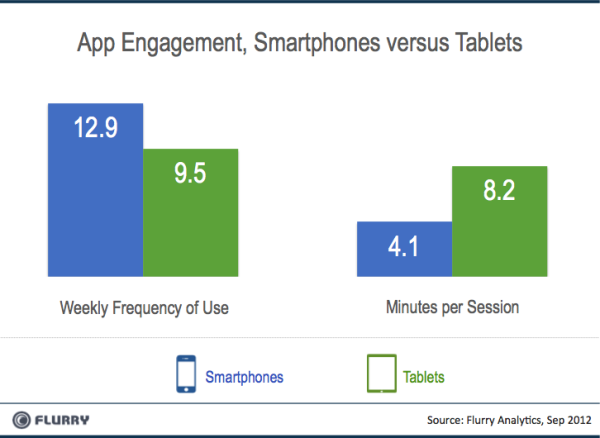 This study was conducted by mobile analytics firm Flurry, and it’s based on more than 6 billion app sessions on 500 million smartphones and tablets in September. For age and gender comparisons, Flurry used a panel of 30 million users who agreed to share demographic data.

In the time spent per app category, the study reveals huge usage of games on tablets with a 67 %. Games are also the main activity of smartphone users with a 39 %.

Social networking comes in next with 10% and 24%, although this numbers may not be accurate, since Flurry’s data doesn’t use Facebook’s and Twitter’s apps for analytics tools. Social networking is more likely to take a much bigger cut on both tablets and smartphones.

The age distribution reveals that smartphone users are a little bit younger than tablet users, 30 years old versus 34 years old.

The gender comparison reveals smartphone usage being slightly more male and the the tablet usage being almost even.

The App engagement comparison shows smartphone users using apps more frequently than tablet users, but for a shorter period of time. This is mostly explained by the fact that consumers mainly use tablets for media consumption compared to smartphone users who have shorter periods of time across more sessions over the course of a day to complete   a number of tasks.

The “Spiritism” behind Conscious Web Development
...it is not only about coding, but it is also about being aware of the bigger picture and the needs of the project. Being aware of each step the project...
269 Likes

Wanted: QA Engineer
Job Description This is chance for a QA Engineer with a passion for quality, continuous integration and performance, to work on a long term - high profile project. You will...
305 Likes
Quick question?