1 in 3 americans has made a mobile payment this year 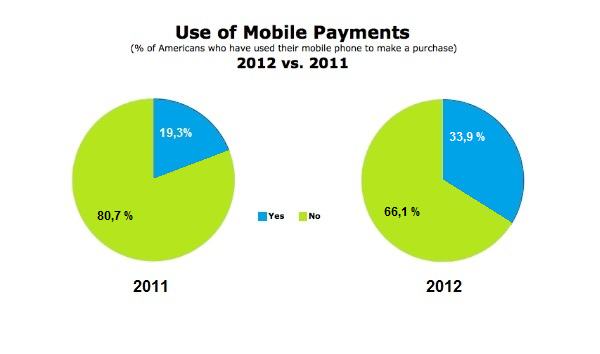 The eighth annual Consumer Payments Survey from IDC Financial Insights, focused on the usage of emerging payment technologies reports that 33.9% of the americans have used their mobile phone to make a purchase. Out of those, PayPal Mobile counts as the most popular service with a stunning 56%.

The report also states that physical goods are the most common online purchase with mobile phones, with more than 7 in 10 people declaring to have purchased such goods. Digital goods come next, with roughly two-thirds purchasing, very well ahead of online services or virtual currency.
The mobile payment market is expected to get to $172 billion in 2012 and exceed $600 billion globally by 2016, says analytics company – Gartner.

Payments through mobile: The cell phone has revolutionized the way that we operate and live our lives. Starting as a simple communication tool it has evolved into being our calendar, instant messaging device, camera, Internet browser and everything else you can think of. But did you know cell phones are primed to take over our primary payment vehicle as well? In countries such as Japan and Korea, it is already possible to pay for vending machine purchases, groceries and even airline tickets by using your cell phone.The latest trend in moblie payments is a new service from Paypal Mobile that even allows consumers to send payments to others, purchasing items from select retailers, or donating money to charities by punching a short code text into your cell phone. Services such as these give consumers the feel of a moblie wallet where cash, credit cards or even wallets are quickly becoming a thing of the past. But what are moblie payments and how do they work?Mobile payments is the process of using your cell phone to make everyday purchases that normally would would require cash or a credit card. Mobile payments are already becoming part of our lives when you think of current offerings like music, video, ringtones, online game subscriptions, wallpapers or any other digital good. However, despite this service reaching world-wide acclaim in developing countries and all across Europe it has yet to break into America. You would think in a country as hungry for instant gratification as we are this option would be a no-brainer, but the are a number of reasons why we have failed to embrace moblie payments.Mobile Payment Challenges:First off, changing the existing payment infrastructure in the United States would be an expensive enterprise, especially for merchants. Another problem is infrastructure support. Mobile payments cannot work if at least one party involved is not connected to the same back-end server that can be quite expensive to implement. Plus, in America people have much more access to personal computers and back accounts. In less developed countries, however, a person can use his or her cell phone for both of these services, making it a far more convenient technology. And one of the main reasons for the lack of moblie payment supremacy in the United States is poor reliability.Just like we have all experienced before, text messages can easily fail or messages can get lost altogether. Think if you were making a mortgage payment on your cell phone and it didn’t go through or the message was lost. Plus there is always the problem of slow connection speed. If your messages are moving slowly it could take hours for a transaction to go through causing delays that most people aren’t willing to accept. And probably one of the biggest concerns is security. What’s stopping someone from stealing your phone and going on a shopping spree and stealing all your money? Even with the protections of pin codes and fingerprint authorization, there is still a level of concern. However, it is fair to point out that moblie payment is in its infancy right now and still feeling its way out. But there is no doubt that it is definitely on the rise.The Pay OffMobile commerce, including moblie payments and moblie banking is predicted to grow exponentially in the years to come. According to the 2006 report, “Mobile Commerce: Dealing with the Devil in the Details,” moblie payments will be worth 55 billion in 2008.There are around 43.1 million moblie payment users currently and it is estimated to grow by 70 percent to 73.4 million by the end of 2009. According to global research firm, Gartner, there will be more than 190 million moblie users by the end of 2012.Mobile payments, although somewhat risky and unproven, without doubt has some serious advantages. The ability to pay utility bills, shopping bills, purchase movie tickets, insurance premiums, and not to mention the ability to perform bank transfers all with your cell phone is an exciting proposition. Once this technology tightens up on its security issues and becomes more safe and reliable, it will turn into a major 21st century convenience that is here to stay for the long term.