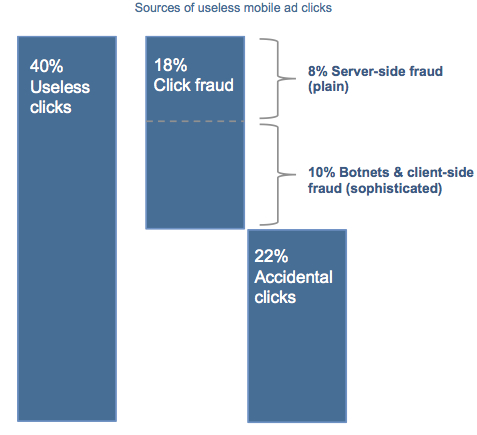 A study conducted by Trademob, a mobile app marketing platform, revealed that more than 40% of mobile clicks on ads are actually useless, being the result of an accidental press or just a fraud.

Click fraud appears to be a growing issue, repeating some of the problems that online advertisers has to deal with. Mobile click fraud falls into two categories: server side and botnets/client side.

Out of the 18% fraud clicks, 8% of clicks are created by an app publisher who uses a server to register false clicks. 10% of the fraud clicks comes in a more sophisticaded way, when someone deploys botnets on a number of hijacked devices to manipulate mobile click data or hide one banner ad behind another, getting 2 clicks at once.

Some publishers intentionally place big banners next to small buttons to induce accidental clicks. Another way of getting false clicks is by placing ads right next to interactive buttons, such as a “next” button.

A survey conducted by Harris Interactive last year, revealed that 47 percent of app users are more apt to click a mobile ad by mistake than on purpose. This year’s Trademob study proves this percentage is going down.