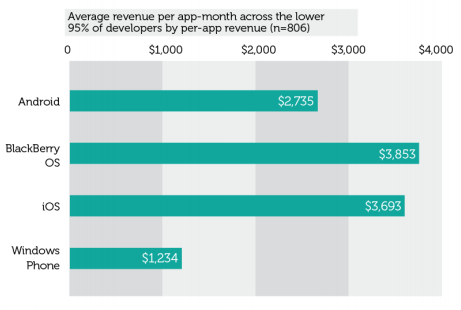 Over the last years, major app stores such as the Apple App Store, the Google Android Market, RIM’s App World or the Nokia Ovi Store made huge profits. But, the question remains: Which mobile OS’s apps make the most money?

VisionMobile.com answered this question with a rather unexpected result. According to their study, BlackBerry still holds the high ground.

The average monthly revenue from a BlackBerry app is $3,853, compared to $3,693 for iOS, $2,735 for Android and a measly $1,234 for windows. One of the main reasons for this result is the fact that BlackBerry platform is also the most cost-effective to develop on. The typical BlackBerry app would cost $15,181 to bring to market, compared to an average of $27,463 in iOS and $22,637 in Android development costs.

Despite the big revenues, the study also revealed that 41% of cross-platform developers think of BlackBerry as a sinking ship, and plan to abandon it sooner or later. And the biggest surprise comes next: Windows Phone was the top new destination for developers with 57 percent saying they would adopt the platform sometime this year. Not to fear, a study conducted last year said that 32% of developers intend to adopt Windows Phone but the share of Windows Phone among developers only rose by 1% this year.

Do you have an app in mind? Contact us for a free quote.

Hi. Please direct me to someone who can help promoting our bestseller app, Photo Editor Extreme. The traffic is really low at the time. It might be because of induction of new photo editing apps. If a review is written at your blog for this app, this would help a lot in gaining popularity that it deserves. Looking forward for your positive response.

P.S: Our photo editing app has been ranked No.1 several times at AppWorld because of its variety of features, user-friendliness and regular bug-free upgrades.

The “Spiritism” behind Conscious Web Development
...it is not only about coding, but it is also about being aware of the bigger picture and the needs of the project. Being aware of each step the project...
196 Likes

Wanted: QA Engineer
Job Description This is chance for a QA Engineer with a passion for quality, continuous integration and performance, to work on a long term - high profile project. You will...
235 Likes
Quick question?